During summer 2016 my mom, my friend, and of course myself went for a hike that we had found about through some research. As I mentioned in my post about waterfalls I prefer hikes where we have a goal in mind (i.e. making it to a waterfall or in this case … a Cold War Bunker!). I don’t like to just wander aimlessly in the woods, I like to know that I am going places.

I, initially, found out about this site on the website “Off The Beaten Path — With Chris & Connie” (click here to go to their post). I am fascinated with caves and history, this hike combined two of my interests.

There is a lot of speculation as to why it is there, who made it, what is was to used for, etc. I have done some research to try and figure it out, but everywhere you look there is a slightly different story, depending on whose research you look at.

I did find an article on the Highline Magazine website by Rob Alexander entitled, “A DARK SECRET: INSIDE ALBERTA’S NUCLEAR BUNKER” . In the article it states:

“At the height of the Cold War, a plot surfaced in the Bow Valley. The plan was to build a high-tech, ultra-secure storage facility overlooking Lac des Arcs in the heart of Mt. McGillivray. It was an ambitious idea, and, given the paranoia about nuclear war, it probably made good sense. But today, it is simply an oddity”  (Alexander, 2015).

The mountain that the bunker is located on is called: Mt. McGillivray.  According to Alexander’s article they felt that this mountain would be a perfect spot in which to provide,

“an underground fortress … [for]’absolute security for vital records,’ according to a brochure promoting its idea. It was a hefty promise but a logical one given its location 500 feet beneath the mountain’s western slope” (Alexander, 2015).

In researching the bunker some people speculated that it was the government who had commissioned this project, but in his article Alexander explained that it was actually a company called “Rocky Mountain Vaults & Archives”.

Of course as we all know this plan was never fully realized, but as Alexander puts it,

“not before workers had dug a tunnel into the north-facing slope of McGillivray, along with a handful of chambers, as part of what was envisioned as an extensive network of vaults that would protect the most important documents of the day” (Alexander, 2015).

It’s interesting to read about what vision Rocky Mountain Vaults & Archives had for this now cold, damp, and graffiti filled network of tunnels. Alexander describes it perfectly,

To read the full article and a more vivid description of how the bunker came to be and ultimately failed I would recommend checking out the article here. I believe this article to be the more researched and genuine, out of the of ones I have read. If you have more information please let me know!

Now, back to my own adventure. Like the first post I linked to points out, it is a fairly easy hike with some small hills and the closer you get to the cave the path begins to serpentine more.

Some things I would recommend for this hike:

This is such a unique hiking experience and a cute little history lesson. I would definitely recommend everyone check it out at least once, but remember to respect the site and don’t litter (don’t be that person who ruins it for everyone).

A greater description on how to get to the trail head and directions can be found on the trailpeak website (find it here).

I hope you enjoyed learning a bit of my local history…happy exploring!

Here are some photos from this hike: (for more photos of this hike click here). 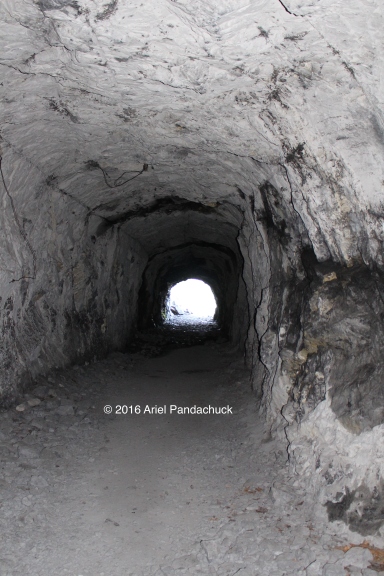 One thought on “Cold War Bunker!”